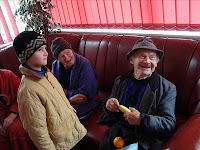 The Joshua Community Centre situated in The Colony, Petrosani, has a varied program and Christmas is one of the busiest times. The new manager, Adina, has taken to her new role very quickly and enabled the staff and volunteers to really make a difference to people who come to the centre.

On the 4th December a small group of children visited the Centre for Elderly People in Lonea. They sang songs, gave cards and small gifts of fruit to the residents. The children were very moved by the activity and by the gratitude of the elderly people.

On the 8th & 9th a social worker from Caritas and some German visitors distributed Christmas packages to the children at the centre.

On the 12th December staff and volunteers took part in “Christmas at the Castle” an NGO type fair which enabled them to promote the work of the Joshua Centre and sell small items in order to raise funds. 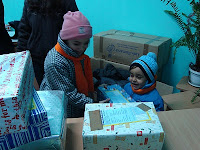 On the 11th, 14th and 15th the staff distributed Shoeboxes to organizations and churches in the Jiu Valley. The shoe boxes had been sent by Link Romania, Worthing, England and to whom we are very grateful. The homework club children and their families also received shoe boxes with lovely things inside.

On the 15th December clothes and shoes were given to 2 poor families sponsored by Roger Baker, a supporter who comes and runs a childrens holiday club in the summer.

On the 16th December there was a Christmas program in the Centre for parents and their guests. Also on the 16th there was a presentation at the Town Hall called “Giving You Gain”.

On the 17th was a Staff dinner. 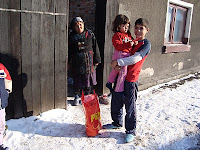 On the 21st and the 22nd food packages were given to some of the poorest families we know in the colony and who are in someway associated with the centre.

So you can see it was a very busy time and all credit is due to the staff and volunteers who enable it to happen.