Christmas at House of Roses, Birlad

We have had an update from Linda of RAKE, telling us about their lovely Christmas at the House of Roses with the 4 youngsters.  We are so pleased that despite all the initial problems all 4 are now settling in well and are coping with the huge changes to their lives.  There are now 2 new support workers in the House, and HAH provides funding for their salaries.  We also gave money to buy all 4 youngsters warm winter clothes and boots – we were horrified to learn that they all left the Camin with only the clothes they were wearing and no other belongings at all. 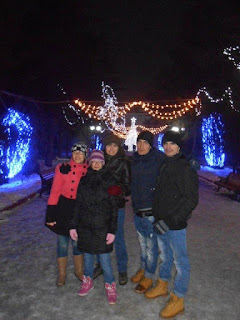 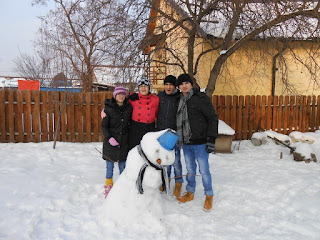 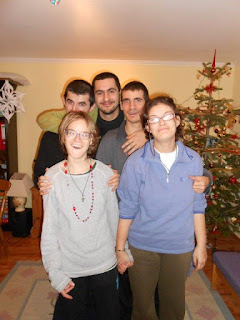 Here is an extract from RAKE’s most recent newsletter:

Myosotis have employed 2 new support workers, Elena and Robert, who had previously worked as volunteers with them. We were able to spend some time with them over Christmas and feel certain that they are the perfect team to be working in Casa Trandafirilor. The youngsters certainly like them.

The boys had been in the Camin (state institution) for three years and they arrived with no belongings. But they did bring lots of negative behaviours. Talking to the staff during our visit we learnt that the boys had forgotten how to eat properly and would just stuff the food in as fast as possible, not chewing or swallowing properly. Their hygiene habits were very poor (there is no toilet paper provided in the camin and minimal washing facilities), and they had picked up bad language. So they are having to re-learn basic skills. They also rocked persistently and were dopey and sleeping for long periods. This was due to the tranquilizers given in the Camin and Myosotis have been reducing the doses of these with good effect.
Having said all that we were so impressed by the progress they have made in just a short time– the boys behaved perfectly at mealtimes, eating nicely and always polite. They were very keen to do everything correctly and not let the team down. The most disruptive habit that we observed was the boy’s speech. They spoke loudly (particularly Ionut) in a slow droning voice and when one spoke the other echoed it in a repetitive fashion. This appears to be a habit and really upset the previous peaceful atmosphere in the house. But it is something Myosotis are addressing and hopefully as the boys realise there is no competition they will calm down.

Unfortunately Geta has been negatively affected by the boys arrival and Myosotis noticed an immediate deterioration in her speech and behaviour. Hopefully she will be back on track again soon. On the other hand Irma has blossomed. She immediately took on the role of “housemother” guiding the boys in how things worked and how they should behave. She now has a role to play which suits her.Despite the issues we were delighted by how smoothly the house ran……

We arrived at 10 pm, had a brief chat with Elena, and were left to it! We didn’t know the routine but this was no problem as the youngsters just got on with it and soon told us what we should be doing! They all knew whose turn it was to wash up etc and they even cleaned the house thoroughly each morning with no prompts from us. Impressive. On Christmas day all the Myosotis team arrived early in the morning and arranged their presents around the tree and then we woke the surprised youngsters up. They were delighted that they had been good enough for Father Christmas to come! The team then left and we had a fun day, in the evening walking into town to enjoy the Christmas lights. The weather was cold (about -7c) but nowhere near as cold as a normal Romanian winter when it can be down to -30c. We had been given a donation to buy the youngsters warm coats and boots which was much appreciated…………………..

They (the support workers)have seen such amazing progress in all four of the youngsters and they are excited about the changes they will see in the next year as they help them re-build their lives. Elena and Robert clearly loved their work and are very committed, as are the whole team………

We cannot forget the despair we have felt at times over the last three years and still feel when we re-member those left in the Camin. But last year instead of finding jokes in our Christmas crackers we found a Chinese proverb “ a journey of a 1,000 miles starts with a single step.” This came as a real encouragement and has been so true. By taking one step at a time we, together with Myosotis, have been able to move forward and are now well into our journey.