News from the House of Roses

Linda Barnes, Trustee of RAKE, recently gave us an update on how the youngsters are getting on at the House of Roses in Barlad, Romania. 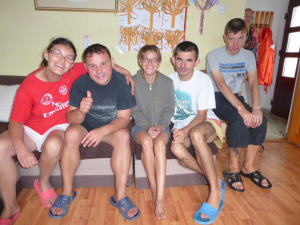 The town of Barlad where Casa Trandafirilor is situated has fortunately not been too badly affected by Covid 19 and the residents and staff have kept well. But of course the project has been affected by the laws imposed to control the spread of the virus.
Residential homes in Romania were given strict rules which had to be adhered to. The staff had to be resident in the home for a period of 2 weeks after which they had to self isolate in their own homes for 2 weeks. This is incredibly harsh but the staff complied with it willingly. We have 4 staff employed so they worked in teams of two and then swapped after 2 weeks. The residents were not allowed to go out in public and we are grateful that they at least have a garden. We sent them a swing ball game to keep them active in the garden but we notice from photos that Irma and Ionut have gained quite a lot of weight.
As in the UK restrictions are gradually lifting and the young people are now allowed out but trying to avoid busy public places. Fortunately, once the main lockdown was over, Myosotis were able to offer a summer job to one of their former volunteers who is studying social care at Iasi university. It was important for the young people to have new people to interact with so this was great. They have also been contacted by another former volunteer who has just finished a university degree in psycho pedagogy. She is hoping for a job at House of Roses (one of the carers is retiring) and they will be interviewing her this week. When taking on a new employee who has just completed their studies you can claim their wages from the state for the first year. This will be an enormous help and hopefully she will be a good and effective member of the team.
In addition, Elena, a social worker who worked for several years in House of Roses, is being employed for 10 hours a week to deal with all the paperwork requested by the authorities. Once on top of the paperwork she has been able to organise individual activities with the young people. George has been difficult to manage, with outbursts of destructive behaviour, and Elena has been taking him out running every night to use up some energy. We are really pleased to have Elena back on board as she is motivated and enthusiastic.
The funding RAKE receives from Humanity at Heart is essential in enabling us to support the project and hopefully enable them to access more state and local funding.
Thank you for your valued support.